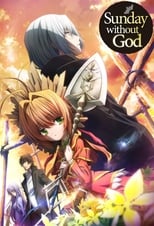 God has abandoned the world. As a result, life cannot end nor can new life be born, and the "dead" walk restlessly among the living. Granting one last miracle before turning away forever, God created "gravekeepers," mystical beings capable of putting the dead to rest through a proper burial. Ai, a cheerful but naïve young girl, serves as her village's gravekeeper in place of her late mother.One day, a man known as Hampnie Hambart, who is supposedly Ai's father, arrives and kills all the people in her village. Having lost her village and with no plans for the future, Ai decides to accompany the mysterious man on his journey. As she travels the land, the young gravekeeper strives to fulfill her duties, granting peace to the dead and assisting the living, while at the same time learning more about the world that God left in this tragic state.[Written by MAL Rewrite]
Nonton juga anime ini:
Tokyo Majin Gakuen Kenpucho: Tou Dai Ni Maku (2007)Haibane Renmei (2002)Tales of Symphonia The Animation: Tethe’alla-hen (2010)Gakusen Toshi Asterisk (2015)Touken Ranbu: Hanamaru (2016)